Are you busy lately? Trying to get a lot accomplished before the holidays arrive and just finding more and more to do? Look at the banner above and you’ll see what’s been occupying my time lately!

Women’s Ministries Certificate Program starts January 20, 2020 – and I am so looking forward to it! I’ve been pouring over these books that will be the basis of the first six-week course – and others for the second course that I’ll also be leading. AND looking at topics, advisors, content providers, and facilitators for the last two courses that will begin later in the year. It’s a lot of work and a lot of fun!

If you’re interested in helping your congregation develop empowering women’s ministries for the 21st century, be sure to sign up!

Meanwhile, take a breath, enjoy the days, and maybe watch some leaves change!

The fall newsletter went out earlier this week – if you didn’t get a copy, you can read it here!

But I also wanted to share a few things here on this blog….

The new Creating Safe Spaces for Children and Youth course begins soon! I’m so excited about it for a couple of reasons. First, it’s longer so participants have more time to absorb the materials and we all have time for more discussion! Second, for this session, the price has remained the same! (That’s my thank you for being the test subjects for the new format and content.) And third, this is now a non-denominational course so we can look at so many different types of policies!

I’ve updated the statistics in the course, and added discussion about some areas we might have been missing, but I’ve also looked at where the evidence might be pushing us for the future.

Another new course that I want to share with you is the Women’s Ministries certificate program that BeADisciple will be offering in 2020! I’ll be leading the first 5-week course starting January 20th on the biblical foundations of the program. We’ll be reading two books about women in the Bible and seeing how those women might relate to our lives today!

I can’t wait for both these courses to begin! And to see you there!

Today (July 22) supposedly ends the dire heat wave NYC has been in for the past week. Not without an extended farewell – several thousands are still without electricity in Brooklyn and severe thunderstorms are expected this afternoon – but at least it is on its way out! 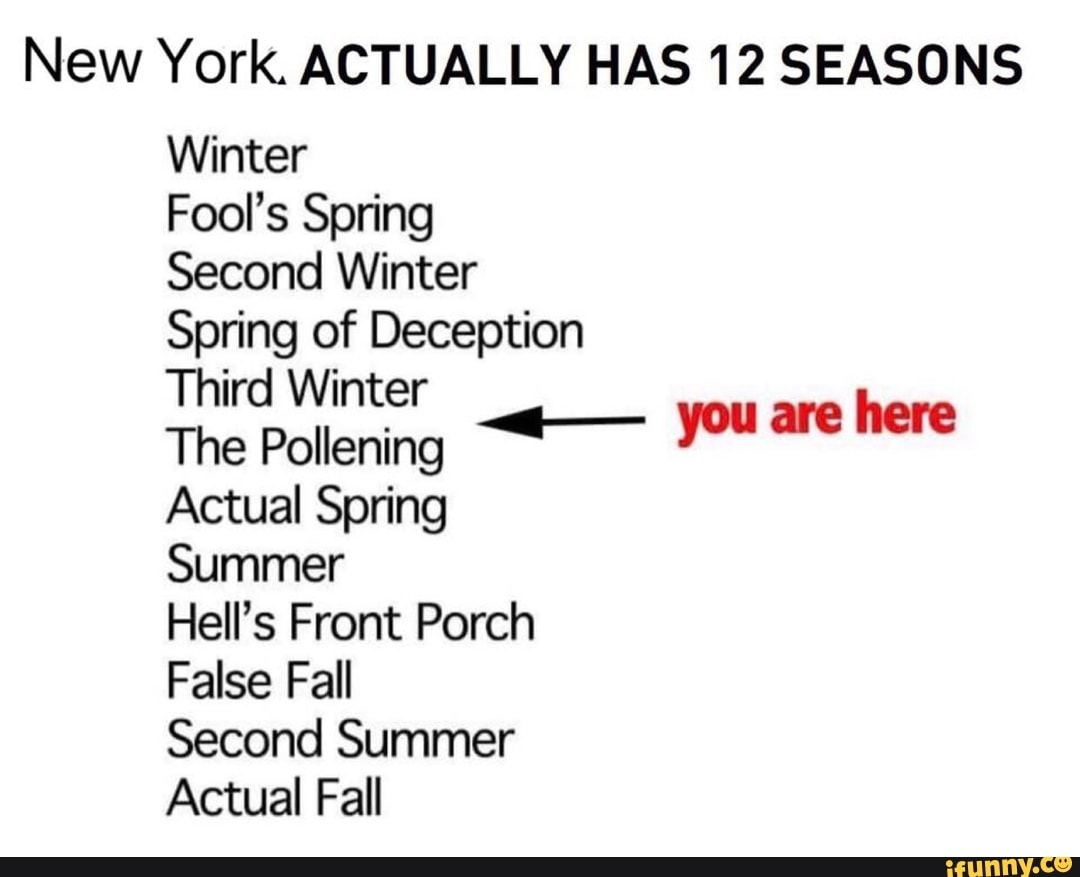 I started laughing at the “Spring of Deception” and didn’t stop! It is so true! The rest of the country may argue the benefits (or not) of four seasons but New York has twelve! And, no, it is not a case of “more is better”!

On the other hand, if we are in a Twilight Zone/ climate change nightmare, the laugh isn’t quite as funny, is it? Yesterday’s worship brought prayer requests for more care for creation, local and universal, and yet most of us go about our lives without making any changes that matter.

Several years ago, I tried an energy-fast for Lent. It irritated me from the start. The authors didn’t know enough about Lent to know Sundays aren’t included! But they also had aimed the fast firmly at suburban/rural folks because about every third “give up” involved a car. Which I don’t own. I had to focus a lot on how long I brush my teeth.

It did make me curious so I took one (or several…) of those global footprint quizzes. Turns out my low-income urban living gives me a pretty small footprint. But it still could be better – and my air conditioning use in the last week has certainly been excessive. Taking the quiz, perhaps, gave me a false sense of security.

So here I am, with no car and minimal toothbrushing time, at the end of this New York “front porch” season, with the AC still humming in the background, wondering how to alter/adjust/limit my participation in those larger creation-threatening activities which simply are not a laughing matter.

How are you handling the heat in your part of the world?

The summer edition of my newsletter is scheduled to enter the ether this morning. If you don’t receive it, check your spam folder or trash – and you can move it to your inbox or label it so the next one doesn’t disappear!

But if you don’t see it, here is a link and you can always sign up if you aren’t already on my list.

Back from Vacation… sigh…

You’ve been there, too, I know it… The vacation glow was visible in all the pictures… and then two days later, you’re home and the grimace has returned! Lines in the forehead, pursed lips, all of it! The Back from Vacation face stares back at you in the mirror and you think, “What happened to beach hair?”

Oh, well…  Back I am and it was a great week and now I’m neck-deep in wonderful work again! No one could complain about that!

So here’s a few pictures from the vacation – maybe just looking at them will help us all destress for a minute or two? (Two weather pictures and one of my gluten free cupcake just for fun!)

I just want to update you on the results of my reunion “wish list”….

First, I wanted to sit on a bench in the quad and reconnect with the squirrels. Several days of rain made the quad a soggy mess so even Wednesday’s sunshine didn’t make me want to walk through the wet grass to sit on a wet bench!

However, I did go early to skip the travel in the rain, which meant I had time to walk to the Borough Park and remember how much I loved that place!

I also wanted to sit in my favorite seat in the cafeteria, overlooking the parking lot… Did that the first day but felt none of the old longing to escape! Maybe it was the gluten free brownie!

A view of a parking lot.

And finally, sitting with friends, remembering the fun and fury – well, that happened over and over! Along with catching up on what has happened since! And even getting a hug from a favorite professor!

Fortunately, it wasn’t all just sitting! We were challenged throughout the reunion, too. Challenged about the past, the present, and the future. How do we make amends for the past, how do we live out the commandment to love our neighbor as ourselves in the present, and how do we preserve a future for the next generation – in church and in creation?

Princeton Theological Seminary at its best.

I don’t know how it happened but 25 years have gone by since I graduated from Princeton Theological Seminary! Next week, I’ll be attending our class reunion and I’m looking forward to doing the following, in random order:

If you were part of that experience – faculty, staff, students of any year – even squirrels – thank you for making it such a memorable time in my life! And I hope to see you Monday!